Maharishi Sadguru Sadafaldeo Ji Maharaj was born in the year 1888 on the fourth day of the first fortnight of Bhadrapada, of Vikram Samvat 1945.

He was born in a renowned yogi family in the lineage of Maharishi Shringi . His forefather, Baba Lalji Rao, six generations above, was a great yogi who used to sit in a firm yogic posture in meditation for six months continuously.

Morning shows the day and the child shows the man. This proverb exactly fits the case of Maharishi Sadguru Sadafaldeoji Maharaj, while still a child of two; he sat aloof on a wooden plank and his father, mother and other elderly members of his house to lay prostrate before him, as he was a great saint. Persons thought that the child was just making fun and they reverently touched his feet. The same boy when began going to school could continue his studies. He wanted to learn Sanskrit in order to know the secret of God realization by going through the ancient scriptures.

At the early age of eleven Sadafal went to Kashi to learn Sanskrit, but the scholars of Sanskrit in Kasi, who were Brahmins by caste, did not agree to impart him the knowledge of Sanskrit, as he hailed from a Kshatriya family. Being disappointed, boy Sadafal decided to practice Yoga, because he had heard that ancient saints and seers got invaluable and deep knowledge of every thing by practicing Yoga. As a result he sat in meditation practicing ‘Unmunimudra’ which Lord Krishna has taught in the Gita. Maharishi Sadguru Sadafaldeo practiced his first lesson of yoga for controlling mind continuously for three years. He sat in meditation in a secluded place in Sidhasana, a yogic posture, for six hours every day.

One night while he was meditating thus, he found that his room was filled up with effulgence. He also heard a sweet and soothing voice from the void. “This won’t lead you to attain the Supreme Lord, as this practice is based on material sense organs.” Sometimes while in a state of meditation, he felt that someone put one of the fingers on the uppermost point of his head. On opening his eyes, he found none there. He could not make out who had spoken so sweetly and who had touched his head with his finger. Later on when Swamiji began practicing yoga inside his cave at Vritikoot Ashram, Pakari, he met a saint with light effulging from him, in the early hours of morning in a lovely field. This saint initiated him into the conscious technique of Vihangam Yoga and instructed him not to come out of his cave before the public until a period of six months of ‘anusthan’ was complete. Swamiji later on realized that the saint he had met was not a common one. He was the Eternal True teacher, Nitya Anadi Sadguru. The Lord is Eternal and the way of realizing him is also eternal. As such the teacher teaching the scientific technique of realizing the Lord is also eternal. He is gifted with the power of materializing his body whenever he wills. He also appears in the physical form in all the four ages viz Satyuga, Tretaa, Dwapar and Kaliyuga and teaches the technique of Vihangam Yoga, the only way of God-realization, to deserving aspirants.

A reference to this effect has been made in the Vedas at several places.

O Lord! Your messenger comes to this world with your nectarian message to emancipate the suffering humanity and leads it to Thee. People as well as Deity’s can’t know Him. We lay ourselves prostrate to his Holy feet.

He practiced Vihangam Yoga for seventeen long years, under the guidance of the same Eternal Sadguru, in his self made cave at Vritikoot Ashram Pakari, Balia, in his cave at Shoonya Shikar Ashram Himalayas, at Jhoonsi Ashram (Prayag) on the bank of Ganges and at several other sacred places. He undertook a number of yoga anusthans (Continuous Practice) lasting continuously for six months. Being pleased with his great sacrifice and perseverance, Nitya Anadi Sadguru endowed him with the authority of True Teacher. In the month of Magh (two months before the Indian Festival- Holi), Eternal Sadguru blessed Maharishi Sadafal deo Ji with the authority of Sadguru and in the process, transferred the divine Brahma Vidya Knowledge to him. It was that auspicious moment when Sadguru Sadafal deo Ji was enlightened with the complete Brahma Vidya knowledge. Only a Sadguru has the potential to bless a disciple with the complete knowledge and authorize the disciple as next Sadguru. No one can claim himself or herself as Sadguru just by reading VEDAs and other books. A sadguru is the one who has the practical experience of Brahma Vidya and who can empower a deserved disciple with the same. Sadguru Sadguru Sadafaldeo ji Maharaj has said in his unique spiritual work Swarveda 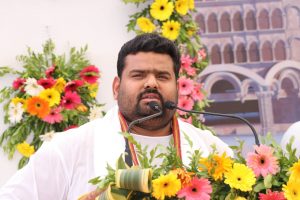